This site uses cookies and related technologies for site operation, analytics and third party advertising purposes as described in our Privacy and Data Processing Policy. You may choose to consent to our use of these technologies, or further manage your preferences. To opt-out of sharing with third parties information related to these technologies, select "Manage Settings" or submit a Do Not Sell My Personal Information request.

Required cookies are essential to let you move around the website and use its features, such as accessing secure areas, shopping baskets and online billing. These cookies allow our website to provide services at your request.

Functionality cookies are used to remember the choices you make, e.g. your user name, log in details and language preferences. They also remember any customisations you make to the website to give you enhanced, more personal features.

Targeting cookies collect information about your browsing habits to deliver adverts which are more relevant to you and your interests. They also measure the effectiveness of advertising campaigns.

Save Settings
Accept All

Volkswagen is saying goodbye to the Beetle, which ended production this year, in a new and emotional campaign called “The Last Mile....

The campaign which was launched this week, includes an animated film scored with a cover of The Beatles’ “Let It Be” from the Pro Musica Youth Chorus children’s choir and out-of-home digital billboards in Times Square in New York.

The video spot includes animated cameos from people including Andy Warhol, who created pieces featuring the Beetle, and Kevin Bacon, whose “Footloose” character drove a Beetle. The ad ends with the car taking flight as a bug with the words, “Where one road ends, another begins.”

“This animated film pays homage to the imprint this car has made as we make way for an exciting future of electric mobility for the masses,” Johannes Leonardo Chief Creative Officer Leo Premutico said in an email to CNBC.

“When creating the campaign, it was very intentional that we didn’t put any one person or moment on a pedestal. The Volkswagen Beetle was the great equalizer for society and culture at large. This isn’t one person’s goodbye or a company’s, it’s everyone’s goodbye.”

The campaign will also include an influencer element, with users posting moments with Beetles on Facebook.

Have you seen it yet?

What do you think of it? 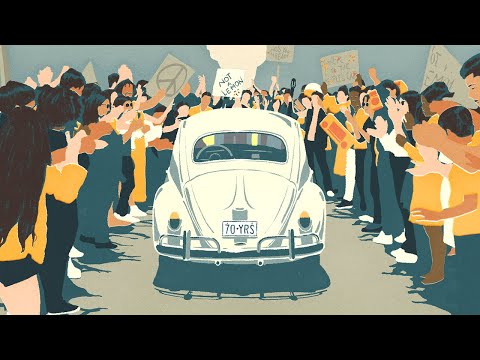 Limerick Road, Tipperary Town, Ireland
Reg Office: Limerick Road Tipperary Town Co. Tipperary
Reg. Company Number: IE78181
Financial Disclosure
Pierse Motors Ltd are a credit broker and not a lender. Pierse Motors Ltd is regulated by the Central Bank of Ireland - we are an authorised Financial Intermediary. Finance is Subject to status. Other offers may be available but cannot be used in conjunction with this offer. We work with a number of carefully selected credit providers who may be able to offer you finance for your purchase.
Registered in Ireland: 78181
Registered Office: Address: Limerick Road, Tipperary, Ireland
Back
Vehicle Valuation
Compare Saved Vehicles
Top
Close